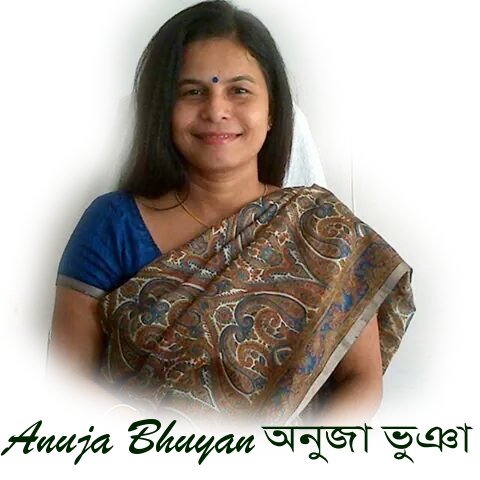 Anuja Bhuyan was born on the 3rd of March 1971 in the historic and cultural hub of Assam the Tezpur town on northern bank of the Brahmaputra river. Her father Late Tarini Bhuyan used to be an official of the Government of Assam. Her mother is Mrs Kalpana Bhuyan and her elder brother is the well known journalist of Assam Mr Atanu Bhuyan. Having grown up in the cultural environment of Tezpur, she took to music right from her childhood. It started when her father brought a Banjo for her and her brother. She attained the Bachelor of music degree from Kalaguru Sangeet Mahavidyalaya under Bhatkhande university at the age of 15 years under the able guidance of Punya Brata Goswami of Nikaamul Xatra. For three consecutive years she bagged the title of Best singer of Darrang college in the years 1988, 1989 and 1990.

She had never taken singing as a profession but rather as a passion. Hence had not taken keen interest to make her songs commercially viable through CD and other forms. But Bandhan, Rihaa, Xei Sowaalizani, Mukhaa, Guwaahaatir Sowaali were some of her cassettes during 1990. “STOPPAGE” an album, purely composed, tuned and penned down by her elder brother Atanu Bhuyan had been her only CD with some melodious songs. Her first playback singing had been for the recent film based on the novel “ Xamiran Baruah Aahi aase সমীৰন বৰুৱা আহি আছে“.

She cleared her first audition for All India Radio, Guwahati at the age of 18 years. Her most favourite TV Programme for which she had rendered her voice was ‘Xaaz’ telecasted in Newslive ,the satellite TV channel from Guwahati. Since her first stage show at the age of 6 years, she had performed in stage shows all over Assam. However occupational hazard has restrained her to do stage performance since 2004.

Did her schooling in the Children’s Paradise School, Tezpur, Assam . Then joined Darrang College, Tezpur and then she completed her educational journey in Gauhati University, Guwahati. She has done B. Ed and is a Post Graduate in Economics. She is an officer of the Assam Civil Services cadre (ACS) with the Government of Assam. Her family comprises of her two chidren ,daughter Mrigakhi and son Bhaswat , her mother–in-law, but her loving and caring husband Hemanta Kumar Baruah is no more alive. But for her and her family, they feel, he is always  alive spiritually.

This is what she has to say on herself “ MY motto in life has been always the belief in the 3D’S ‘Determination, Devotion and Dedication’. I am a very sincere person to be easily relied upon..”