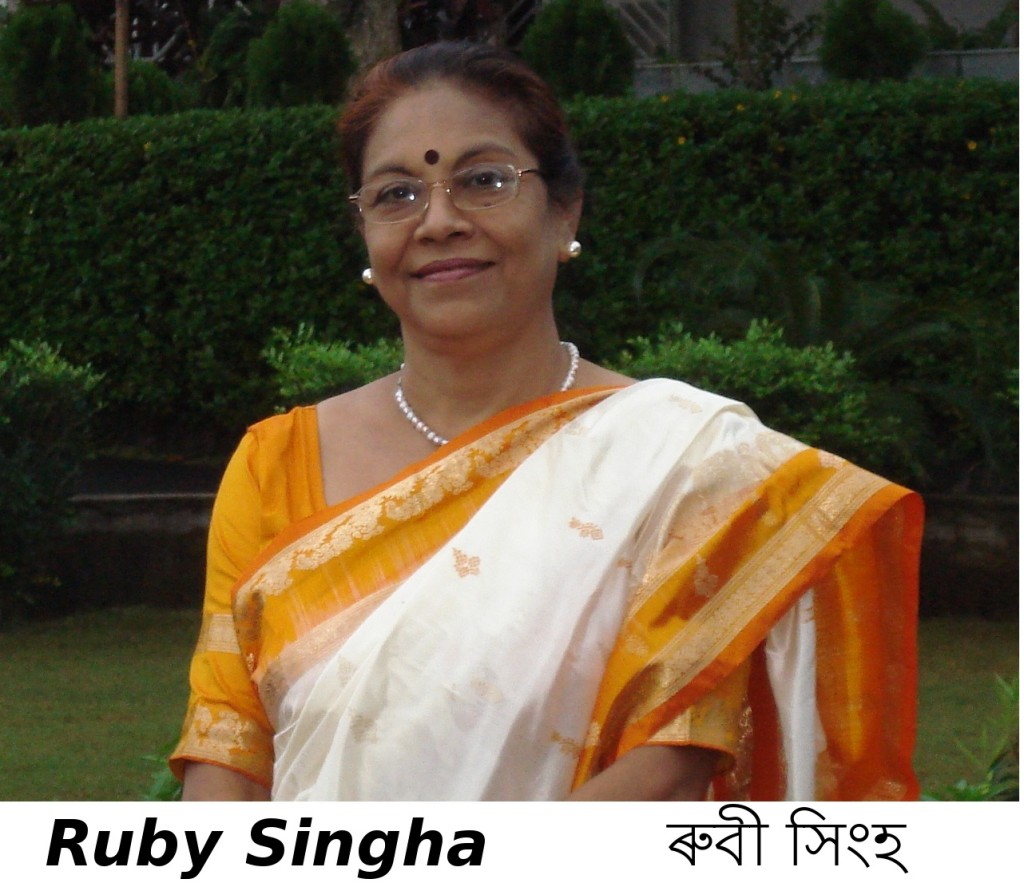 Ruby Singha was born on the 15th of December 1946 in the culturally alive and active Tezpur town of middle Assam on the northern bank of Brahmaputra. She is one among the melodious voiced popular singers of Assamese modern music. She was born to Mr Probodh Chandra Barua and Mrs Prafulla Bala Barua, both of them deceased. There was a vibrant cultural environment in her family. Mother Prafulla Bala Barua was a singer she had sung songs directed by the great Assamese musician Bishnu Prasad Rabha which were recorded in 1936 in the then famous Senola Company of Calcutta (Kolkata). These songs include the evergreen numbers of Bishnu Rabha “Tilai tilai টীলাই টীলাই“, “Kurua botahe কুৰুৱা বতাহে“, “Rongpuria ji ৰংপুৰীয়া জী“ and “O alohi ah অ‘ আলহি আহ“. She had also sung duets with Bishnu Rabha namely “Guru mor xonkor গুৰু মোৰ শঙ্কৰ“, “Nawor bhoroxa naire নাৱৰ ভৰষা নাই“. She obtained her first lessons in the tenets of singing from her culturally endowed mother, right from her childhood.

Her father was likewise a reputed actor who worked alongside the greats like Phani Sarma and Bishnu Prasad Rabha.

Her musical experience was bolstered further with her marriage to the well known musician Mr Ajit Singha in 1968, who was a singer, composer, music director all rolled into one. The musician couple is blessed with two issues a boy Ritom and a girl Sangita both well established now. Her husband had remained a constant source of inspiration and guidance till his sad demise on the 11th of May 2003.

She started singing as a regular artist with All India Radio Station of Guwahati since 1978 and is still continuing. She sung songs in two Assamese films first one is “Gonesh গণেশ“ and the second one is “Bonxodhor বংশধৰ“. She has sung in two music CDs (Compact Disc) namely “Mayabi rati মায়াবী ৰাতি“ and “Senehi geet চেনেহী গীত“ the later of which was produced by All India Radio, Guwahati and consisted of songs of Bishnu Prasad Rabha. She has released also a music cassette of her songs named “Bondhu বন্ধু“ and sang in a music cassette “Indradhonu ইন্দ্ৰধনু“ of songs of Bishnu Prasad Rabha produced by Directorate of Cultural Affairs, Government of Assam. In 1983 she had sung duets with Dr Bhupen Hazarika in a HMV produced record.

Apart from being a reputed singer she is also a lyricist and composer something which she has been doing since her school days in Tezpur. She was officially recognised as a lyricist by the All India Radio, Guwahati in 1986. She has lent her lyrics in two Assamese films namely “Duronir rong দূৰনীৰ ৰং“ and “Bonxodhor বংশধৰ“. The widely popular song sung by Pulok Bannerji “Moi aji xongi bihin মই আজি সঙ্গী বিহীন“ is her creation. She has published a book of her songs named “Totini তটিনী” in the year 2010.

Ruby Singha got her graduation in Arts (BA) in 1968 from Darrang College, Tezpur under affiliation with Gauhati University, Guwahati. Her schooling was also wholly in Tezpur namely Tezpur Mazgaon LP School and Tezpur Girls High School.